This page records seismic events from the Punggye-ri Nuclear Test Site, and also a natural earthquake that occurred on the Korean Peninsula shortly after the September 2016 nuclear test.


Seismometer observations:
The first North Korean underground nuclear explosion (UNE) to be clearly observed at EPSO was detonated on the 9th September, 2016 at 00:30:01 UTC.  The earthquake equivalent magnitude for this event was 5.1 (Mb), and 702 seconds following the explosion a weak brief seismic signal was detected at EPSO, being the first few cycles of the P-waves.  Following this unexpected detection, earlier EPSO data were checked and it was found that P-waves had also been recorded from an earlier North Korean test that occurred on the 6th January, 2016.  The table below shows seismograms from the two 2016 nuclear tests as recorded by EPSO's Sprengnether S-6000 triaxial seismometer, which show that for both events the signal amplitude was not much above the background noise, and that the local ground motion primarily vertical in orientation.  The P-phase arrival times (i.e. the 'P'-markers shown on these plots) were estimated by the IASP91 velocity model which is incorporated into the WinQuake seismic analysis program which produced these plots.  No other longer period waves were detectable above the noise floor.  The frequency of these P-waves was about 1.8Hz (6th January) and 1.5Hz (9th September).

EPSO Array observations:
The P-waves from the 2016 North Korean tests were also observed by EPSO's 3-element seismic array, which are presented in the table below.  This array incorporates three Kinemetrics SS-1 Ranger sensors (in vertical orientation) which all clearly detected the signal, and in near-perfect synchronisation.  This implies that the P-waves are traveling essentially perfectly normal to the Earth's surface, and explains why the local ground motion is predominantly vertical.  This also implies that the events were teleseismic and not due to local noise.  As with the Sprengnether S-6000 sensor, these P-waves had frequencies of about 1.8Hz (6th January) and 1.5Hz (9th September).

Another indicator that the nuclear test 'earthquake' was indeed caused by an underground explosion is to look very closely at the very first seismic waves to arrive.  At the point of an underground explosion (both nuclear and mining) the earth is compressed outwards away from the explosive charge, causing the initial seismic wave to convey a motion away from the blast.  So for upward traveling seismic waves originating from a distant blast location, one would expect the initial compressional wave to cause the ground to move upwards.  The adjacent plot shows unfiltered data from an EPSO's Willmore seismometer (September 3, 2017 test) and shows that the very first indication of the P-wave's arrival was indeed in an upward direction (i.e. upwards on this plot and also for the actual ground).  Seismologists call this effect compression and the opposite motion is known as dilation, and for natural earthquakes the initial P-waves may show either compression or dilation.


Observations by other Australian seismic stations: 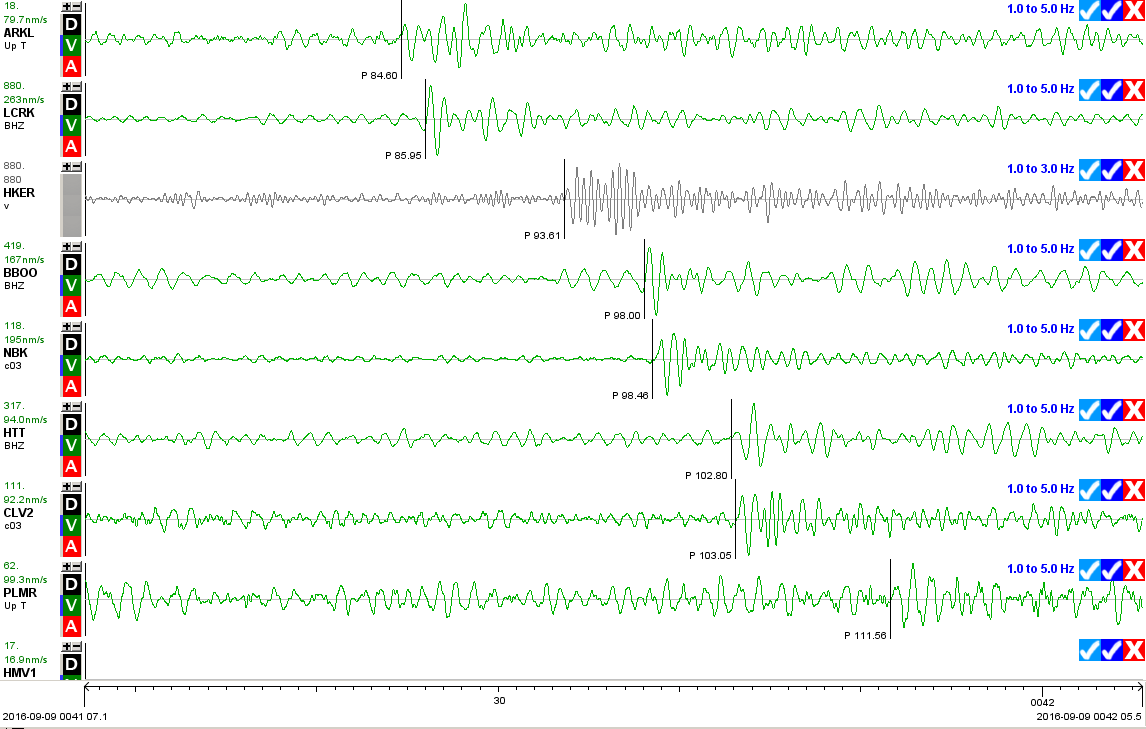 The September 2016 nuclear test P-waves were also detected across various Australian seismic networks, with the adjacent plot showing the propagation of the waves across seismic stations located in South Australia (image courtesy of Geological Survey of SA and Geoscience Australia networks - click on image to view full-size).  The waveforms of the adjacent image look similar to those recorded at EPSO and may also be compared with other example underground nuclear test waveforms presented in Datasheet DS 11.4 of the New Manual of Seismological Observatory Practice.
So are the North Koreans really detonating UNE's?
For smaller seismic events, say less than magnitude 4, it is feasible to simulate a UNE by detonating a sizable quantity of mining-grade explosive down a deep mine shaft, and it is difficult to unequivocally prove what caused the blast simply by looking at seismic signals alone.  Chemical explosions in mines may in a few extreme cases generate earthquakes up to ML = 4.5, but for man-made seismic events larger than magnitude 4.5 the cause is almost certainly from UNE's.


Making your own observations:
The purpose of this web page is to catalogue EPSO's observations of North Korean nuclear tests, but also to demonstrate to interested amateurs that it is perfectly possible to detect relatively small UNE 'earthquakes' even at large distances (8300km in this case) using modest economical seismic logging equipment and home-built or surplus seismic sensors.  Having said that though, the two essential requirements are the use of quality sensors, and operating at a seismically quiet location.  When operating within or nearby towns and cities, the very weak UNE seismic signals are very likely to be swamped by vibrations caused by automobile traffic, trains, etc.

The raw unfiltered PSN data show that the weak North Korean UNE signals may at first glance appear to be completely buried within microseismic and local noise, but since the waves arrive at EPSO with a relatively uniform frequency of somewhere between 1.5 to 1.8Hz, applying a 0.5-4Hz band-pass filter to the raw data very effectively pulls the signals from the noise.  The great circle distance from the Punggye-ri Nuclear Test Site to London, England is around 8600km, and likewise the distance to San Francisco, CA is around 8750km, and it is 10,750km to Washington DC.  So Europe and North America are similarly distant to North Korea as EPSO is, and therefore interested amateurs should be able to detect Korean UNE waves with comparable amplitudes to EPSO (although there is a global P-wave shadow zone at great circle ranges of around 11,400-15,800km, from where P-waves cannot be received).  Other amateur seismologists are detecting them, such as this example recorded at Mitchell, South Dakota.


The beat goes on...
On the 3rd September 2017, at 03:30:05UTC, the sixth and largest North Korean UNE was detonated at the Punggye-ri Nuclear Test Site.  The amplitude of the signal at EPSO was around 7 times that of the September 2016 test, so clearly a very large device had been detonated, with size estimates in the order of 50-250kt of explosive power.  The following table shows compact traces from EPSO's S-6000 sensor for test numbers 4↔6,and shows the increasing amplitude of the UNEs.  For the 2016 tests only vertical ground motion is clearly recorded at EPSO with any horizontal motion hidden in the noise, whereas for the bigger September 2017 test, horizontal motion is now clearly visible.


With increasing UNE size, the frequency of the ground motion recorded at EPSO appears to have actually decreased a little.  The follow table shows the spectral peak frequency measured from the first 20-seconds of P-wave data, for the three tests recorded so far, from each axis of EPSO's Sprengnether S-6000 instrument.